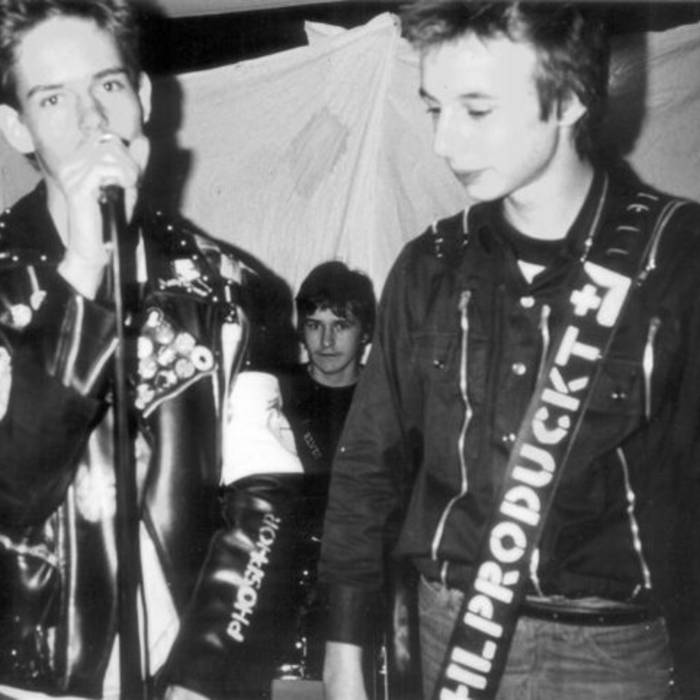 FEHLPRODUCKT was a Punk Band from Stuttgart Germany, founded by Thomas Schaller (Bass) and Ralf Sandner (Vocals, later on in VOICES OF PROTEST & MURDER DISCO X ) in 1979.

This is a lost Tape from the very first practices and something which sounds like the Line Up that went on stage. The good songs from the later Lineup are all lost, there was live recording from our Debut Show with NORMAHL and CHAOS Z (who also played their first show that night) but the tape was nicked by Thomas "Mähu" Ziegengeist (of Aktueller Mülleimer fame) because both bands destroyed NORMAHL totally.

The first few songs were recorded with a boom box, with Thomas and Ralf shouting directly in front of the built in mike and no bass. Last few songs where recorded on an old BASF Mono tape machine with a mike taped to a broomstick. Everything was copied to used Music cassettes from the 70ies. Xth generation copy and 33 years of aging did not help to improve the sound quality.
We left the recordings as they were and did not try to improve this with the digital tools we have today.

We were a bunch of 15 year old kids. In true punk Tradition no one was able to play their Instrument. Only proper gear we had was a Peavy bass amp (which can be seen on the backside of the BUTTOCKS "nein nein nein" 7" - the promoter borrowed the amp for the Show at the Club Easy - but we were kicked from the line up). In the beginning we had a run down Drumkit, a selfbuild guitar cabinet and poorly wired amp, and the vocals went over a shitty Mike and a Hifi amp and Speakers

And we used the same song with different lyrics in the beginning, because all our first guitarplayer could do was sliding with one finger over the frets.

FEHLPRODUCKT made it into the pages of Sounds magazine before we even played live and we were asked to tour with SCHROEDER ROADSHOW after that. Which never happened of course.

The final lineup of FEHLPRODUCKT consisted of two Thomas and two Ralf and split in 1981. One Ralf and one Thomas wanted to play Ska, which was the hype of that year, the other two wanted to play Oi! which was pre-UK82 the hardest Punk music available.

The follow up Band was named DISAFFECTED. Thomas had to leave School pretty soon after that when he bought a van with money he "borrowed" from his father and went to Udine, Italy with it - meeting bands like EU's ARSE and UPRIGHT CITIZENS - and finally getting busted by the Italian Cops.

After Thomas leaving DISAFFECTED turned into VOICES OF PROTEST who also split in 1984. Ralf is still doing music today in MURDER DISCO X. Thomas is a Tattoo Artist in Tübingen.

Bandcamp Daily  your guide to the world of Bandcamp